All About the Club Fair 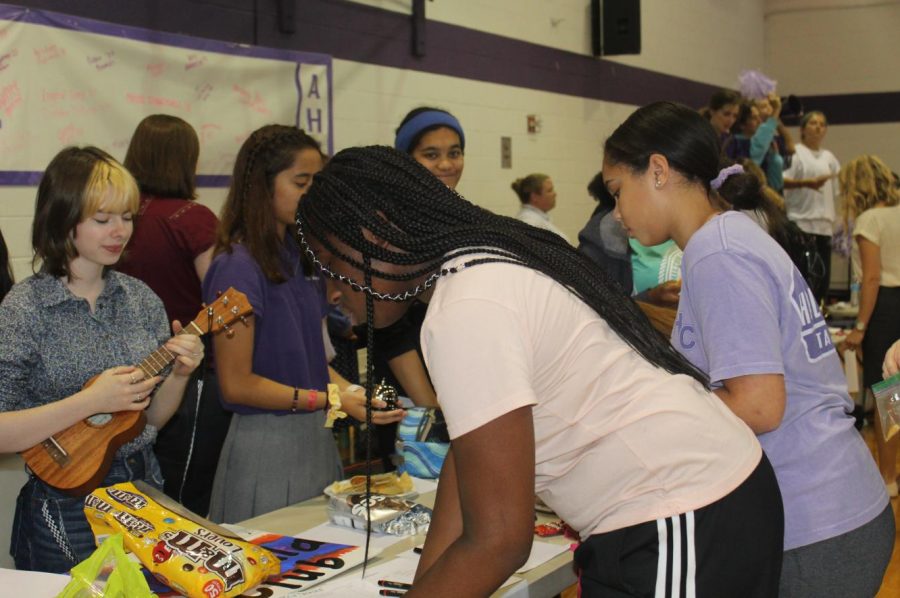 Signing up for Performing Arts clubs at the club fair

Tartans visited stations with information and signed up for clubs at the annual club fair.

With three new clubs, there was a total of 36 clubs presented at the fair. The new additions were the American Sign Language (ASL) Club, the Botany Club, and the Technology Club.

At the fair, several of the clubs had candy and food to entice students to join their clubs. Others had different signs and paraphernalia associated with their clubs, which created a festive energy in the gym.

Freshman Christina Young commented, “I didn’t expect the Booster Club to be singing at the top of their lungs.” The Booster Club showed their spirit by being decked out in purple and singing and dancing to attract students.

Welton expected over 50 students to sign up for her clubs. Although, she explained, “The hard part is getting the students who signed up to follow through and come to the meetings.”

Clubs are a way that the school allows students to be empowered girls, through holding leadership positions, or exploring interesting topics in the clubs. Welton shared, “I am looking forward to having a lot of new members and for empowering more girls in STEM.”

For freshmen and transfer students, the club fair is a great way to get involved and to meet new people with similar interests.

Young expressed, “It was a lot of fun and there was so much going on.” She added, “I joined five clubs including Best Buddies, Environmental Club, and Bake for Hope. I joined Bake for Hope because I really like baking and we get to raise money for a good cause.”

The fair was organized by Phyllis Ouellette, Director of Student Services, who oversees the AHC clubs. Ouellete explained, “You need three things to start a club. The first is a mission statement because all of our clubs are mission based. Then you need three to four activities that the club is going to do during the course of the year that will support that mission. And, lastly, you need a moderator.”

Ouellette hears from many students who want to start clubs, but who have issues with their plans. She mentioned, “Sometimes girls come and they haven’t thought it all the way through yet.” This is why having a mission statement is so important.

Ouellete recommends that before a student comes to her with an idea, they look to see if other clubs are similar to the one the student wants to start. She continued, “Some girls aren’t aware of all the activities the other clubs are doing.”

While many students sign up for several different clubs, they come to find out that they might not be as interested as they thought or have to manage their time better. The result is that many clubs have a lot of students sign up, but many fewer actually come to the meetings.

Clubs will begin to meet throughout September, and LOTAs who signed up can experience what they are all about.